Siena Inns » Events and News » Panoramas in Siena: where to see the sunset and magnificent horizons

Panoramas in Siena: where to see the sunset and magnificent horizons

Siena is such a beautiful city that it deserves to be admired from every possible angle. In addition to strolling through its historic center, elected Unesco World Heritage Site in 1995, an excellent way to appreciate the charm of this city is to access some of the panoramic sites from which to gaze out to the most remote of horizons. So let’s find out which are the best places to admire the fantastic panoramas in Siena, those ideal places from which to appreciate the poetry of a sunset and from where to admire the City of the Palio in all its splendor.

The best panoramic locations in Siena

There are various places to reach to admire splendid panoramas in Siena. Many of these places are located in institutional sites of the city, but a very particular and appreciated location is also the suggestive panoramic terrace of the Hotel Garden.

So, let’s see where to see the sunset and the magnificent horizons in Siena.

The Torre del Mangia represents the civic tower of the Palazzo Pubblico and stands in the beautiful context of the famous Piazza del Campo.

From its top floor it is possible to admire an exceptional panorama also because the tower is 87 meters high, roughly like a skyscraper of about thirty floors. To reach the top of the Torre del Mangia it is necessary to climb 300 steps, but then the effort is rewarded by the possibility of being able to see the underlying Piazza del Campo, the expanses of the Val di Merse, the hills of the Chianti and the heights of the Monte Amiata.

Originally, the so-called Facciatone should have represented an extension of the city cathedral, but some logistical difficulties and the arrival of the Plague prevented the completion of the work.

Over time, therefore, this site has turned into a wonderful panoramic position over Siena and every day it is visited by hundreds and hundreds of visitors. Also in this case the view includes the main city buildings, but also picturesque natural horizons.

To admire the panorama of Siena from the Facciatone you have to buy the ticket Opa Si Pass which allows you to access this and all the other areas of the museum complex of the Cathedral of Siena.

By accessing the Medici Fortress you can admire not just one, but many views of Siena. This famous city location represents one of the main destinations for sports activities, beautiful walks, and by moving within it the view changes continuously.

This ancient fortification, commissioned by Cosimo de’ Medici, also represents an important fulcrum of the city’s social life; in the center of the Fortress, in fact, there is an amphitheater used for outdoor screenings, shows, cabaret shows and concerts.

Among the best locations from which it is possible to admire enchanting panoramas in Siena there is also the suggestive panoramic terrace of the Hotel Garden.

Throughout the months of spring and summer, those who stay in the Hotel have the opportunity to wake up surrounded by beauty and start the day in the best way by having breakfast in this characteristic panoramic site.

During the day, then, the American Bar opens, a destination for relaxation, recreation and conviviality to have a good coffee or to taste excellent cocktails and delicious musical aperitifs. At dinner time, however, the terrace turns into a welcoming open air restaurant.

Obviously, the panoramic terrace of the Hotel Garden is also a perfect location for all couples who want to get married in Siena within the frame of a breathtaking panorama. 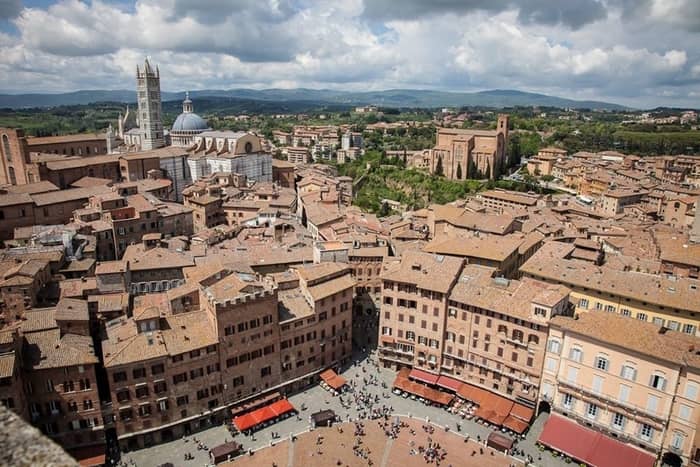 Panoramic photo of Siena with Piazza del Campo in first impression and the Duomo and the Basilica of San Domenico in the background. 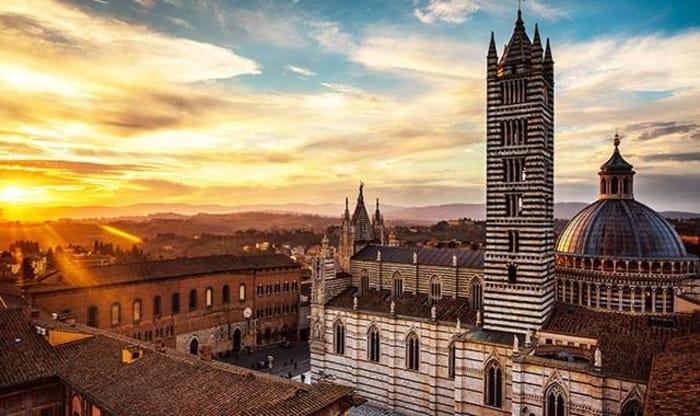 A golden sunset descends to color the skyline of the city of the Palio. 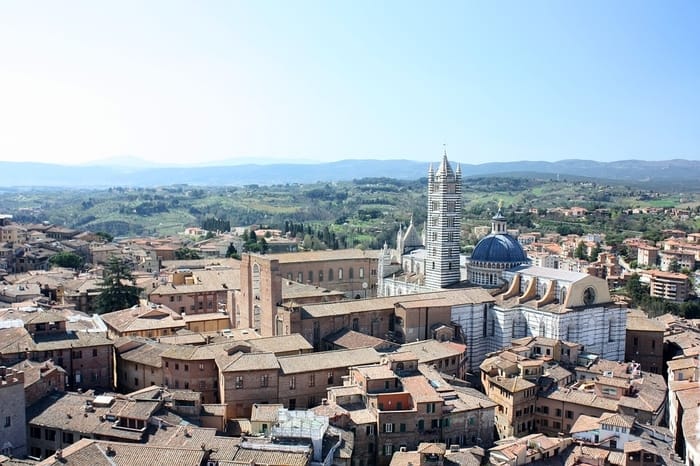 Another wide view of the historic center of Siena. The so-called Facciatone is clearly visible in a central position. 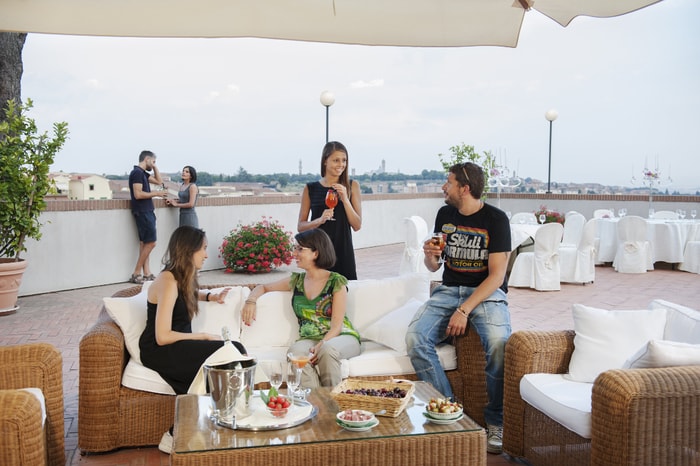 Time passes happily and serene on the panoramic terrace of the Hotel Garden.