Siena hotels in the city center 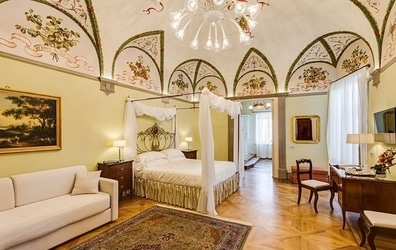 Are you looking for a hotel in the historic center of Siena?

Are you looking for a hotel in the historic center of Siena that can guarantee you a peaceful rest, an excellent breakfast and allow you to arrive in just 5 minutes on foot in Piazza del Campo?

For a comfortable, elegant and relaxing stay choose the Relais degli Angeli, an original boutique hotel in Siena including surprising rooms and all the comforts needed for a comfortable overnight stay in the heart of the city.

As you know, a disadvantage of staying in the historical centers of Italian cities, such as Siena, is represented by the fact that these areas are Limited Traffic Zones (LTZ) or areas in which circulation to unauthorized vehicles is prohibited; however, by staying at Relais degli Angeli this disadvantage is beautifully balanced by advantages such as close proximity to the most interesting tourist sites, shopping streets, shops, clubs, wine bars and restaurants in the center.

In other words, by booking accommodation at the Relais degli Angeli you will have no need to get back in the car because the main things to see in the city can be reached all on foot and in a few minutes!

To be even more specific here are the main places of interest in Siena and the relative distances in meters and minutes from the Relais degli Angeli: 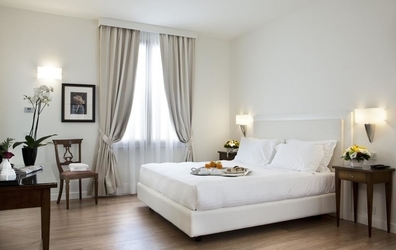 Or would you like a hotel in the center but easier to reach?

Let’s instead assume that your search for hotels in Siena in the city center is aimed at finding a hotel in the center, but outside the walls and the LTZ and easily accessible by car and by train.

In this case a perfect solution that meets all the requirements listed above is the Hotel Italia, a 3-star hotel located in Viale Camillo Benso di Cavour.

The property we are referring to is perfect because it is:

But it doesn’t end here…

Here is another set of accommodation advantages offered by the Hotel Italia: 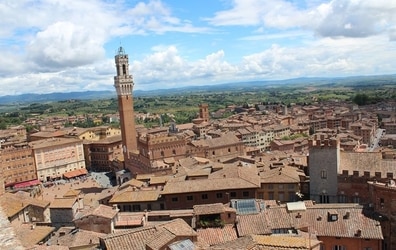 Discover the wonders of the historic center of Siena in one day!

What to see in Siena in one day?

Our tour to discover Siena can only start from Piazza del Campo, one of the most beautiful squares in the world. Piazza del Campo has a particular shell shape and a floor made up of segments of different colors that converge towards the Palazzo Pubblico.

The Palazzo Pubblico, in turn, is one of the most famous buildings in the city and represents a splendid example of a Gothic-style civil building. The building houses the Civic Museum and is flanked by the slender and imposing bulk of the Torre del Mangia.

On the opposite side of the square there is the Fonte Gaia, the monumental fountain of the city, while other admirable architectures near the square are Palazzo Chigi-Zondarari, Palazzo Sansedoni and the Loggia della Mercanzia.

Entering the Loggia della Mercanzia is also the shortest way to find yourself admiring one of the oldest buildings in Siena, namely Palazzo Tolomei, built during the early 1200s which is located right in front of the Church of San Cristoforo.

Going forward on Via Banchi di Sopra you then reach Piazza Salimbeni where the homonymous Palazzo Salimbeni is located, which is also famous for being the headquarters of the Monte dei Paschi di Siena bank.

From one side of Palazzo Salimbeni you then enter Via della Sapienza, through which you are right in front of the Basilica of San Domenico which houses interesting artistic works and precious marble angels made by Benedetto da Maiano.

Then, proceeding along Via Camporeggio and Via di Fontebranda we arrive behind the beautiful Siena Cathedral which absolutely deserves to be visited thoroughly for its architectural beauty and for the artistic heritage it includes. The museum complex of Santa Maria della Scala is also located near the main place of worship in the city.

This is actually only a small tour that touches some of the most important sites in Siena, but once you arrive in this wonderful Tuscan city you can take any direction with the certainty of finding yourself admiring art, history and beautiful civil and religious architecture.

The same consideration made above can also be extended to the surroundings of Siena: the countryside and the numerous centers located in the province of Siena are in fact favorite destinations for national and international tourism.

In this regard, it is sufficient to consider that Siena is the Italian province with the most UNESCO World Heritage Sites (Siena, San Gimignano, Pienza, Val d’Orcia) and with more spas (as many as 7).

Get more information on the historic center of Siena