Siena Inns » Hotels around Siena and in the province

Hotels around Siena and in the province 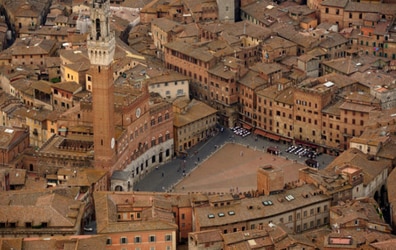 Do the surroundings of Siena start outside the center?

What is meant by Siena’s surroundings? Does this term refer to the city area that develops just outside the historic center, or to areas outside the city?

If we identify Siena with its historic center which has been named Unesco World Heritage Site (Piazza del Campo, Palazzo Pubblico, Torre del Mangia, Fonte Gaia and immediate vicinity), then the surroundings can also be areas of the city not affected by the LTZ and in which there are many city districts.

From a geographical point of view, in fact, the most central districts, some of which border Piazza del Campo, are those of the Oca, the Civetta, the Torre, the Leocorno, the Aquila, Onda and the Selva; the outermost districts, which we could therefore define as located near Siena and its historic center, are Pantera, Chiocciola, Tartuga, Valdimontone, Nicchio, Giraffa, Bruco, Lupa, Drago and Istrice.

In truth, many of these districts are located a few minutes on foot or by car from the historic center, but in any case they are located in the outermost, more peripheral areas of the city, where there is no traffic limitation and where you can also find green spaces.

Book a hotel outside the historic center of Siena 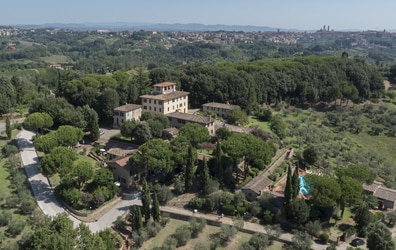 Or are the surroundings of Siena right outside the city?

From a historical point of view, however, the territory of Siena is what is delimited by the so-called Terzi, the ancient subdivisions within the city walls.

The Terzi organize the various districts as follows:

In this case, therefore, the surroundings of Siena are defined as the various areas of the city not included in the Terzi and which begin to be part of the countryside of Siena. Staying in these areas is perfect to spend a relaxing weekend, a quiet holiday and to spend a few days away from traffic, noise and smog.

Although it is not a hotel, but instead a farmhouse, an example of a tourist facility located near Siena is Villa Agostoli, a welcoming accommodation complex with apartments for rent for couples, families and groups of friends.

Each accommodation of Villa Agostoli includes a large living room, a well furnished kitchen, stylish bedrooms, a convenient parking and, outside the building, there is also a lovely swimming pool where you can spend happy moments of free time during the summer.

This property can be considered a hotel in the Siena area because it is still .

Discover the quiet of Villa Agostoli in the surroundings of Siena 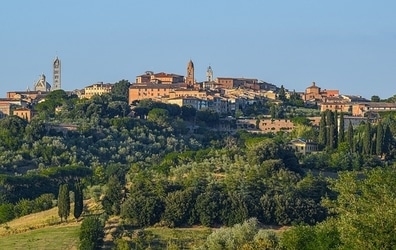 When is it convenient to stay in a hotel in the province of Siena?

Choosing to stay in a hotel in the province of Siena can be advantageous above all to meet specific needs.

Spa lovers, in fact, may choose to stay in a hotel located in the several spas in the area, wine lovers could consider booking a structure in Chianti , while fans of beautiful nature could opt for the picturesque scenery of the Val d’Orcia.

However, it must be said that the Siena area lacks adequate railway connections, does not have a developed motorway network and some sites are located in the open countryside, far from clubs, convivial places and social gatherings.

For this reason, the disadvantage of staying outside Siena could be to find yourself “confined” in the chosen village without having too many choices for leisure or after dinner.

The right and logistically most sensible choice, therefore, remains that of sleeping in Siena and moving day by day to the different locations to visit.