Of the two Palios of Siena planned for 2019, the only one that took place has been the Palio della Madonna di Provenzano of July 2, which, after a throbbing finale, saw triumph of the the district of the Giraffa. Now all the spotlights are pointed on the race of the Assunta of August 16; in this regard, on Sunday July 7 the three districts that were missing from the list of participants for the race of August were extracted: they are the Bruco, the Drago and the Pantera. The hope is that the second and last Palio will also deliver the vibrant emotions that characterized the first race of the year.

Palios of Siena 2019: the surprising finale of the Palio di Provenzano

The Palio della Madonna di Provenzano 2019 will be remembered above all for the incredible finale that characterized the race.

The race of the first palio of the year, in fact, had been practically dominated by the district of the Chiocciola which was overcome by the Giraffa right on the finish line. Actually, wanting to see the arrival with a little imagination, it is as if the animal that gives its name to the district had stretched its long neck to gain the first position.

The two districts arrived so close together that even the technical judgment on the ranking remained suspended for a few seconds. In the end, however, the Contrada members were able to celebrate the jockey Giovanni Atzeni, known as Tittia, and the horse Tale e Quale. Also noteworthy is the excellent race of the Drago that from the rear has managed to climb back to the third position. 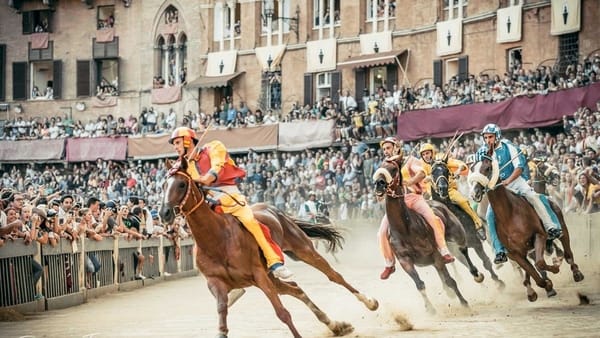 Now the Palio of the Assunta

Putting the Palio of July 2 in the archives, now the organization machine of this historic event of Siena is already working for the next race scheduled in Piazza del Campo for Friday 16 August. For the Palio dell’Assunta, the Mossiere will be Bartolo Ambrosione, and the author of the drapery the famous artist Milo Manara.

For the next race it is easy to predict that the city of Siena will be invaded by many tourists for various reasons; the race, in fact, takes place in one of the most popular holiday periods of the year, immediately after Ferragosto, and is also scheduled on a weekend.

Scrolling through the roll of honor, last year the Palio of August 16 was won by the district of the Lupa with the jockey Giuseppe Zedde, known as Gingillo, on the horse Porto Alabe. 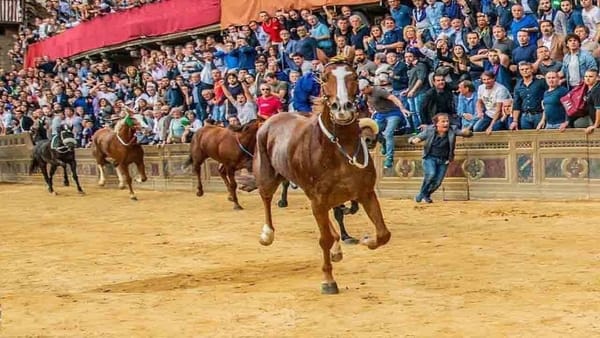 The ten Contrade participating in the Palio of the Assunta 2019

After the draw on Sunday July 7 in Siena, the list of Contrade participating in the Palio dell’Assunta 2019 was also defined.

The names of the three districts extracted are those of the Pantera, the Drago and the Bruco which are added to the districts that have not descended into Piazza del Campo for July 2, that is Aquila, Chiocciola, Oca, Onda, Selva, Torre and Istrice.

In truth, the first district extracted was that of the Valdimontone which, however, must serve a disqualification round and therefore cannot present itself at the start. The rivalries that will be present in Piazza del Campo for this race will be three: the one between Oca and Torre, the one between Aquila and Pantera and the unilateral one of the Onda towards the Tower.

The same Valdimontone, in addition to Tartuca, Lupa, Giraffa, Civetta, Leocorno and Nicchio, are the seven Contradas that will compete by right in the the Palio of 16 August 2020.