Siena Inns » Events and News » Palio di Siena of 2 July 2019: participating Contrade and how to see it

Palio di Siena of 2 July 2019: participating Contrade and how to see it

On Sunday 26th May, at the Sala degli Arazzi of the Town Hall in Piazza del Campo, the Contrade participating in the Palio di Siena of 2 July 2019 were nominated. In addition to the seven Contrade that had acquired the right to participate in the race dedicated to the Madonna di Provenzano, other three were drawn by lot. The draw was also lucky for a district that will not compete but will be able to serve a disqualification round. Let’s discover the definitive list of the Contrade of Siena that will compete for the first Palio of 2019 and the various possibilities to watch the race.

The list of Contrade that will participate in the upcoming Palio di Siena of 2 July 2019 has finally been defined.

Those of Drago, Giraffa and Chiocciola are the 3 names randomly drawn which will be take part in the race in Piazza del Campo together with Aquila, Onda, Bruco, Selva, Pantera, Civetta and Torre.

Turning the focus to the details of the extraction, the Giraffa was extracted by the Istrice, the Chiocciola by the Pantera and the Drago by the Contrada of Valdimontone. During the ceremony, the Tartuca (at the hands of the Torre) was also extracted so that it could serve one of the two disqualification rounds.

The order of extraction of the remaining districts, which acquire the right to participate in the Palio of 2 July 2020, is the following: Nicchio, Valdimontone, Istrice, Leocorno, Lupa, Oca, and Tartuca. 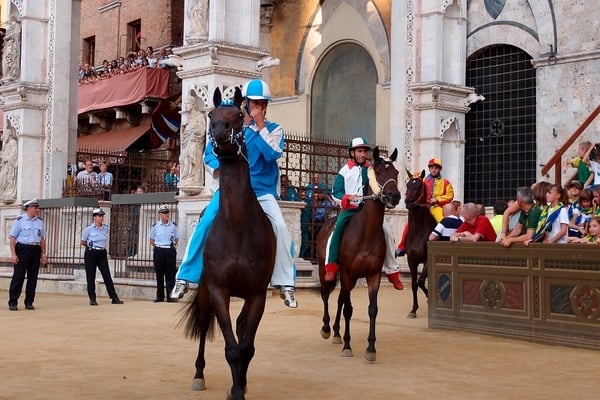 The rival Contrade for the Palio della Madonna di Provenzano 2019

The extraction of Sunday 26 May was also awaited to understand what could have been the rival Contrade in the square for the upcoming Palio of the Madonna of Provenzano.

Considering the situation of the Contrade of Siena participating in the next race, the only pair of rival Contrade is represented by the Aquila and the Pantera.

It is, however, peculiar the case of the rivalry Onda-Torre: in fact, the Onda recognizes the Torre as a rival in the Piazza, but the Torre does not consider itself as enemy of the Onda.

For the Palio of 2 July 2020, instead, the presence of two rival couples represented by the Nicchio-Valdimontone and the Istrice-Lupa is already ascertained.

The program of events for the Palio of July 2nd

Those who wants to participate in the Palio della Madonna di Provenzano must know that the race of July 2 will be the culmination of a series of events that will take place starting from the end of June.

All these events will take place in the so-called days of the Palio, a period of 4 days that ideally starts with the assignment of the horses and ends with the race in Piazza del Campo.

In particular, here is the program of events for the days of the Palio della Madonna di Provenzano: 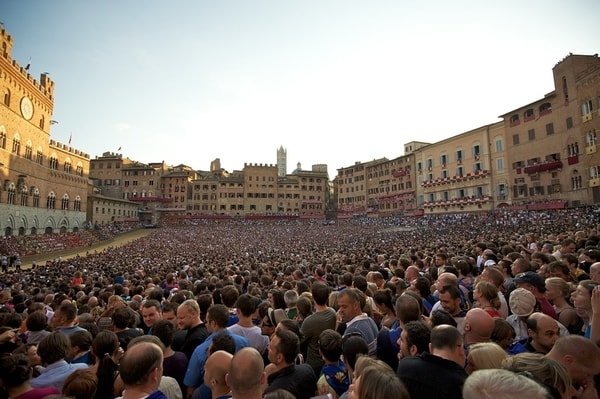 In this regard, we remind you that the Hotel Garden in Siena is fully available for:

For a comfortable overnight stay a few minutes walk from Piazza del Campo, the Siena Inns hotel company also offers accommodation at the Hotel Italia and the Relais degli Angeli, while for an accommodation in the midst of nature, but just a few minutes from the city center, we recommend the comfortable and elegant apartments of the Agriturismo Villa Agostoli.

Discover other curiosities, anecdotes and information on the Palio di Siena.